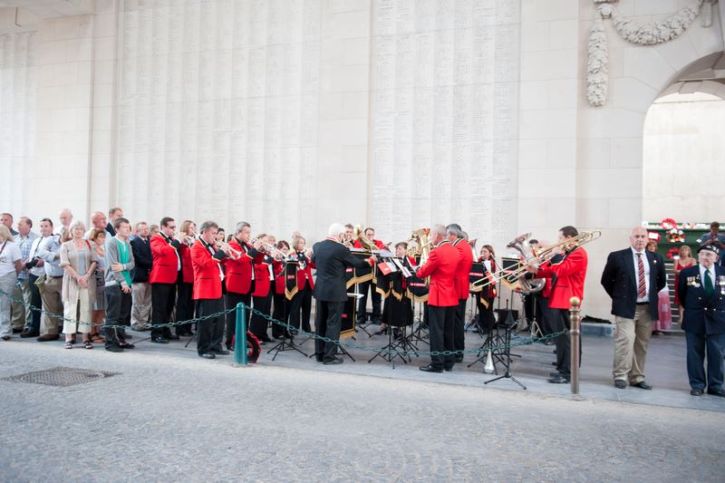 Playing at the Menin Gate Ceremony in Ypres

In July 2010, BAE Systems Brass Band visited the city of Ypres in Belgium to carry out two performances. The first was for passersby outside the Cloth Hall, which houses the Museum of Remembrance. The second was at the Menin Gate during the daily Remembrance Ceremony there. The Menin Gate is a memorial that commemorates the military personnel who lost their lives fighting in or near Ypres during the First World War.

The memorial is located on a main road under which traffic and pedestrians pass daily. Every night of the year, without exception, the road is closed to traffic at 8pm. to allow buglers from the Ypres Fire Brigade to play “The Last Post.” This ceremony has taken place since 1927, with the only exception being during the Second World War, when the Germans occupied Ypres and banned the ceremony.

Alan Bristow, the Brass Band’s Chairman, said: “This was the second time that the BAE Systems Brass Band has played at the Menin Gate. On both occasions, members of the band found it to be both a stirring and thought-provoking service. The band is very proud to represent the company and taken a part in this historic ceremony .