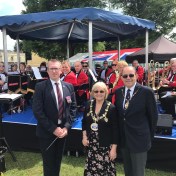 The band performed at this year’s Medway Armed Forces Day at Great Lines Heritage Park, Gillingham on Saturday 25th June. What a privilege as always to be asked to entertain the crowds on this special occasion. Our MD, David Lockwood is a Sergeant in the Band of the Irish Guards and he felt such pride when conducting the band on this… Read more »

The band came down to Broadstairs on Sunday 19th June and performed a variety of music to a large audience. The Musical Director, David Lockwood chose a varied programme and here are some examples – Eve of the War, Fat Bottom Girls, Mr Blue Sky, Balkan Dance, The Great Escape and a bit of Abba Gold to finish the concert. Broadstairs… Read more »

After the Covid  disruption of the last couple of years, the Band was absolutely delighted to be to able to perform at this year’s busy Kent Garden Show at the Kent County Showground, Detling. The Band’s performances took place over three days from Friday to Sunday and ranged in size from a hendectet (11 players) on the Friday to the… Read more »

The band made the long journey to Stevenage on Saturday 19th March in order to compete in the 2nd Section of the Regional Qualifying Contest for 2022.  This was organised by the London and Southern Counties Region of the National Brass Band Championships of Great Britain and, due to the Covid pandemic, is the first to take place in this… Read more » 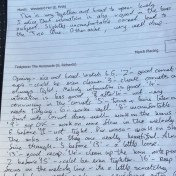 It was a good day at the office for the the band at the scaba Spring Contest at Reigate College yesterday. In its first contest performance since January 2020 the band, competing in the 2nd section, came 2nd in both the test piece and the march competitions. The contest was held as one open section section and out of all… Read more »

After being unable to play at all last Christmas, the band had its first Christmas engagement this year playing carols at The Forum Shopping Centre in Sittingbourne. It was a late afternoon start on a week day, so with our retired members, rest days, others rescheduling their work day, and one a guest player we managed to put out enough… Read more »

The Band completed its, and Brenchley Gardens’ Covid  truncated 2021 summer with an excellent performance in front of a large and thoroughly appreciative audience. The weather, which had threatened to put a damper on things, held off and  it was pleasantly warm throughout the concert.  The Band delivered a varied and entertaining sixteen piece programme starting with Dan Price’s Starburst… Read more »

After missing 2020 due to the Covid pandemic, the band was delighted to be able to play once again on Deal Bandstand.  This was only the band’s second public performance in a year and a half and so it was such a delight to be able to perform in front of a large and knowledgeable audience. Thanks must go to… Read more »

The Covid pandemic has affected all walks of life and has put live music on hold since March 2020. Thankfully, the band members are all well and were all able to start rehearsing together a few weeks ago.  For its first concert since December 2019, the band played in front of Broadstairs Bandstand on Sunday 11th July 2021 (Social Distancing… Read more »

On 24th 2021 the band was delighted to have its first indoor rehearsal since the end of March 2020.  The Covid-19 pandemic meant that bands and other musical groups have been unable to rehearse or perform during this period and so, it was with great anticipation that everyone turned up at Larkfied Village Hall for a fully Covid safe, socially… Read more »