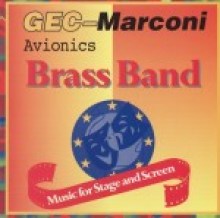 PROGRAMME NOTES: The pieces played on this Compact Disc are arrangements of melodies heard on the stage and screen during the past years except for “Hollywood” which Is an original composition by Goff Richards. This piece depicts the varying moods of slapstick comedy, romance, western and contemporary action drama. The march “Death or Glory” was featured in the 1996 film Brassed Off. “Colors Of The Wind” was the main theme from the Walt Disney motion picture Pocahontas. Music from opera is included with “Nessun Dorma” played as a cornet solo, and a euphonium duet replaces the human voice in “Deep Inside The Sacred Temple” from the Pearl Fishers by Bizet. Melodies from the pen of Lloyd Webber, “All I Ask Of You” and “I don’t know how to love Him”. played on trombone and flugel horn respectively. “Cavatina” is the theme from the film The Deer Hunter. The menacing start to the “James Bond Collection” reminds the listener of the intrigue and skul-duggery of films such as Goldfinger, The Spy who loved me and From Russia with Love interwoven with the main ‘James Bond Theme’. The 1930/40 period of great stage music has been Included with “Lets Face the Music and Dance”, “A Nightingale sang In Berkeley Square” and tunes made famous by Glenn Miller and his band entitled “Miller Magic”. “Ticket to Ride” and “Solitaire” remind us of entertainers like The Beatles and Neil Sedaka, with the final track coming from the show “Riverdance”.