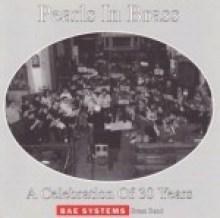 BAE SYSTEMS Brass Band celebrates 30 years of music making with the recording of this Compact Disc. Bill Skinner was the first Musical Director and due to his enthusiasm the band was soon busy playing in local venues and supporting company even.. In 1987 the band registered for both local and national brass band contests, Keith Woodger was appointed as Musical Director the following year and still leads the band today. During the following years prizes in contests have been won, cups and shields have decorated the band room on many occasions and the band has represented London and the Southern Counties in National competitions in London and Nottingham.
Continental tours have taken place with visits to Holland, Belgium, France and Germany on five occasions. Prestigious engagements include performances at Canterbury Cathedral, Grosvenor House Hotel, London parks and the band has represented the company at Farnborough Air Show and the International Festival of the Sea at Portsmouth. A busy band involved in fund raising and charitable concerts as well as preparing for brass band contests. Tapes and CD’s have been produced as well as a BBC broadcast.
The personnel of the band have been together for many years. Mothers, fathers and offspring are members along with eight couples who have all met, sailboat exception, as a direct involvement with music. No member of the band receives payment or expenses. `BAE SYSTEMS BRASS BAND – helping to keep music a living experience’ is the motto of the band. It is the hope of all the members that, while one listens to this CD, the enthusiasm and excitement of playing music is portrayed to the listener.

Recorded on the 2nd & 3rd February 2002 at St Mary The Virgin Church in Elham Kent by kind permission of Canon Jonathan Russell.

Thanks also to Geoff Collins, guest player and all our supporters. Photographs of the band on cover and inlay courtesy of Peter Steer & Jonathan Veal. CD picture label courtesy of Phil Chisholm. British Bandsman Newspaper.