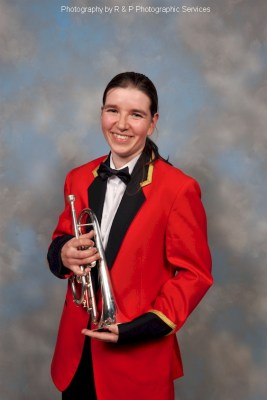 Helen started playing at the age of 7 on trumpet (for a few weeks!) before moving to cornet when she joined the newly formed Darwen Junior Band under the direction of Gordon Clough. When the Blackburn and Darwen Middle Band were formed she moved up and, after a couple of years playing 2nd man down, changed to playing Flugel. This band contested in the fourth section nationally and locally and also took part in the Whit Marches. The junior and middle bands were training bands that supported the Blackburn and Darwen Band with whom she played on several occasions. Helen also played with the Lancashire Youth Band under the direction of Peter Read for 6 years, participating in weekend courses and playing alongside Leyland Daf, as they were known at that time, under the direction of Richard Evans.

She achieved Grade 6 on both cornet and piano before school exams had to take priority and also took part in local school music competitions and slow melody contests.

There followed a three year break from banding whilst completing her training at Coventry to become an orthoptist. On qualifying in 1993 she moved to Maidstone to work at the Kent County Ophthalmic and Aural Hospital and her orthoptic career has seen her remain working for Maidstone and Tunbridge Wells NHS trust. At present she is site lead at Sittingbourne with a special interest in Stroke patients having studied eye defects following Stroke for her Post Graduate Diploma in Orthoptics.

On moving to Maidstone, she was put in contact with GEC Brass Band by the then conductor of the Blackburn and Darwen Middle Band and she joined in December 1993. During her time with BAE SYSTEMS Brass band she has been on numerous tours, participating in many contests and concerts. The highlights of her time with BAE SYSTEMS Brass Band so far have been sharing the stage with David Daws and Alan Morrison.

Helen met her husband Jon through the band and they married in 2002. Jon recently left the band to pursue other musical projects, partly because they now have two beautiful daughters, Juliette and Francesca who both enjoy their music. Juliette dances Ballet and Tap weekly and enjoys singing, and Francesca is following in her footsteps with the singing.

Return to Player ListHer other musical tastes outside of banding include a love of musicals, popular music and opera (having been lucky enough to see Aida at the amphitheatre in Verona).